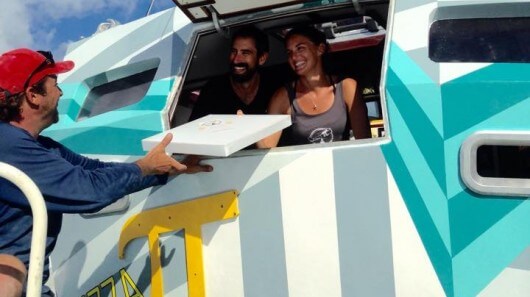 Fans of food trucks have likely gotten used to the convenience and pleasure of strolling down a sunny street, checking out which trucks are present and which specials look appetizing, and then choosing what they’d like to have for lunch or dinner – all of it seemingly on the spur of the moment.

Now, boat captains and their crews in the Caribbean can enjoy something of the same feeling. A pair of pizza enthusiasts, Tara and Sasha Bouis, recently took on the task of completely re-outfitting an old aluminum sailboat so that they could offer freshly cooked pies to people on the water near Christmas Cove in the Virgin Islands.

As the couple explained to Gizmag, "We worked on private charter yachts in the Virgin Islands for a number of years and always remarked that a pizza boat could do really well in some of the more secluded coves, especially where there are no on shore dining options.”

The ship, called Pizza Pi, offers a variety of custom-baked pizzas, which range in price from $19 for a three-cheese pie to $30 for a Cuban-inspired creation. Individual toppings cost anywhere from $2 (for some veggie items) to as much as $10 for lobster. Fear not, gluten-free fans, there are also pizza options for you!

And would anyone want some gelato once you’ve downed every last bite of your 16-inch pie? The boat also stocks pints of the frozen stuff from a local provider.

It took Sasha and Tara two years to finish re-building their vessel by hand. The kitchen is equipped with a large dough mixer, chest freezer, custom refrigerator and a counter top pizza oven that can cook a quartet of pies at one time. There is also a specially built window that’s ideal for passing out the finished orders to approaching boats.

The next phase of the dream, the couple says, is for other people to consider starting up food boats so that the area becomes more attractive to marine tourists.

Not a clue, the couple says, adding that their present state of contentment is enough for now.