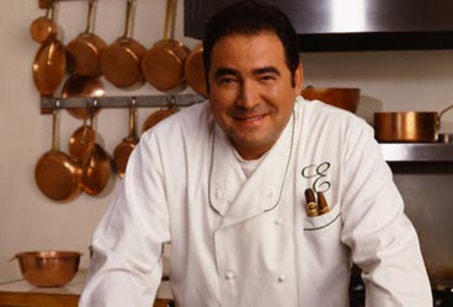 Much as cobbler’s children have been known to wear shoes in disrepair – despite the cobbler’s professional skill in repairing everyone else’s boots or loafers – it stands to reason that celebrity chefs might not want the hassle of dealing with a commercial-scale enterprise in their own homes.

Wolfgang Puck, whose name is used to sell prepared foods as well as signature dishes in 20 dining establishments, has a kitchen with marble countertops, glass-fronted drawers filled with coffee beans and several built-in wine racks.

Bobby Flay, on the other hand, has two kitchens, one outdoor and one indoor. The outdoor kitchen features a wood-burning stove. Quoting an Elle Décor article, Vila says that Flay’s indoor set-up includes "a commercial 10-burner stove, two ovens, a fryer, a griddle, and a salamander, along with seating that includes two café tables and a farm table." And, naturally, a commercial grade hood for proper ventilation.

In 2001, Julia Child’s home kitchen in New England was shared with the Smithsonian's National Museum of American History. Some of the items on display include the enamel saucepan that Child bought in France when she was attending the Cordon Bleu cooking school in the 1940s, as well as a salad spinner which she was credited with introducing to American foodies.

In 2008, Alice Walters, who runs Chez Parisse in Berkeley, renovated her 100-year-old home to add a sizeable worktable, wood-burning oven and several windows. Her restaurant is renowned for using locally sourced organic items.

New York Times food columnist Mark Bittman made headlines a few years back for having a relatively small kitchen. However, says Vila, “the turkey looked delicious all the same, proving once and for all that it's not the size of the kitchen that counts, it's how you use it.”